Patent Applications in the European Continent having Origin in China

In recent years, the investment from Chinese companies in Europe has increased substantially [1]. The fact that there is a growing investment by Chinese companies in European jurisdictions may result in a greater concern by these investors to protect their intellectual assets in Europe. In this sense, this article will seek to identify the profile of patent applications having origin in China and filed in European countries, in order to identify the main jurisdictions targeted by Chinese applicants and which are the technological fields of the respective patent applications.

We have gathered information referred to patent applications from public patent databases, namely the databases Espacenet and EP Bulletin Search, both provided by the European Patent Office (EPO), the statistics database made available by the World Intellectual Property Organization (WIPO), and the database OECD.Stat provided by the Organization for Economic co-operation and Development.

Investment from China in Europe

The figure 1 shows the cumulative value of Chinese foreign direct investment (FDI) in the European Union (EU) by country from 2000 to 2019 1. The top 10 countries recited in figure 1 have received in said period almost 90% of the overall Chinese FDI.

According to data from the MERICS 1, the sectoral mix of Chinese investment in Europe was quite concentrated in 2019, far more so than in the previous year. The sectors Automotive, Consumer Products and Services, Financial and Business Services, Health and Biotechnology and ICT received more than 80 percent of total Chinese investment within the EU.

Total number of patent application having origin in China

Regarding the main technological fields of applications filed by Chinese applicants in Europe, emphasis on patent applications related to the areas of digital communications, computer technology, telecommunications and heavy machinery and energy is observed in the set of results. Figure above presents the results related to the indicator Patent publications by technology, from 2000 to 2018, obtained from the WIPO statistics database.

We have used the database EPO Bulletin Search for identifying the main Chinese Applicants that file European patent applications. According to this database, in 2018 were filed 8991 European patent applications wherein the proprietor/applicant is from China. The top 20 applicants retrieved from these results are recited in Table 1. Indeed, the main applicants are related to digital communication, computer technology and telecommunications sectors. 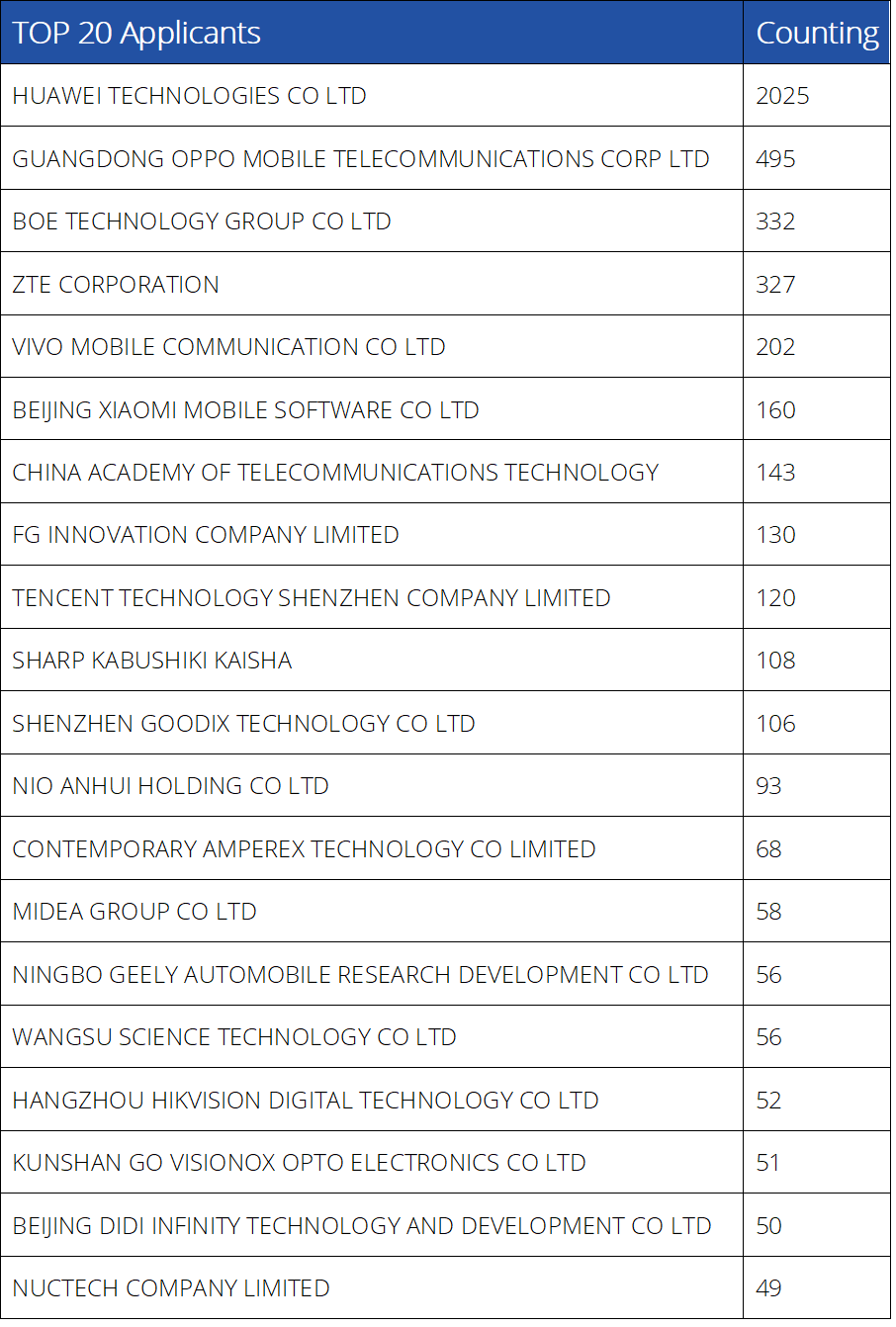 From this study, it is possible to remark some useful conclusions that indicate the current scenario of the protection of intellectual assets of Chinese organizations in European jurisdictions.

Our small study concludes that there is an increase in the number of European applications from China. This growth has been overwhelming and coincides with the entry of Chinese companies in the global market for technological products. The technological development that China has had in the last decade has triggered several inventions, and this is latent when we analyze the types of inventions present in figure 5. The inventions related to computers and communications are highlighted in the first places. When considering the companies requesting the majority of patent applications, they are well known companies, in the sector of telecommunications and computer devices.

Finally, we would like to express that this growth trend is not expected to slow down in the coming years. Chinese companies have been given greater prominence in technological development worldwide, and the number of patent applications is certain to continue to rise.

This article was originally published in China IP Magazine.