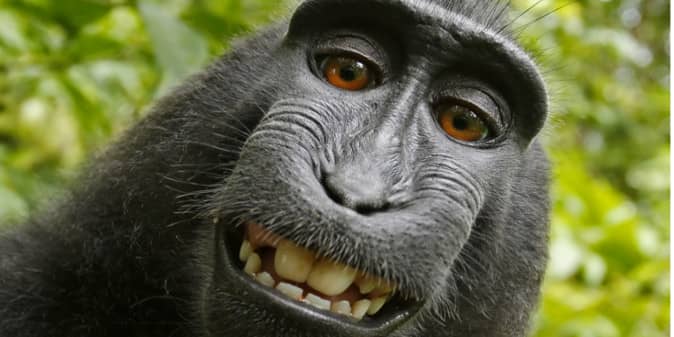 The story of Naruto, which is the name given to an Indonesian macaque ape who rose to fame after taking a series of perfectly framed ‘selfies’ with a camera continues to widen its controversies with regard to copyright laws.

The recent development arise from the animal rights organisation known as ‘People for Ethical Treatment of Animals’ (PETA) which has taken action and sued photographer David Slater on behalf of the Indonesian monkey. The lawsuit which was filed on the 21st of September claims that “the monkey selfies are digital photographs fixed in a tangible medium and are original works of authorship created by Naruto”. PETA further asserts that “any royalties from the sale of the image should be used solely for the benefit of Naruto, his family and his community, including the preservation of their habitat”.

The images taken by Naruto have stirred much controversy with regard to the ownership of the photographic material. The most notable case was witnessed last year when Wikimedia claimed the images where of public domain. This was later challenged by Slater that claimed that the images belonged to him.

This new chapter brings a whole new perspective to the controversy due to the fact that if PETA manages to successfully win the case, it would establish a new interpretation of the current US copyright laws. The group claimed that “the decision in this case could be the first time that a non-human animal has ever been declared the owner of property, rather than being declared a piece of property.

“We could consequently witness a ground-breaking step forward in society—the acknowledgement that animal rights should be recognised for the sake of animals and not for the exploitative benefit of humans,”

We will continue to update you on the outcome of this developing story.

The protection of copyrights through Algorithms

The implementation of the Beijing Audiovisual Performances Treaty in Nigeria