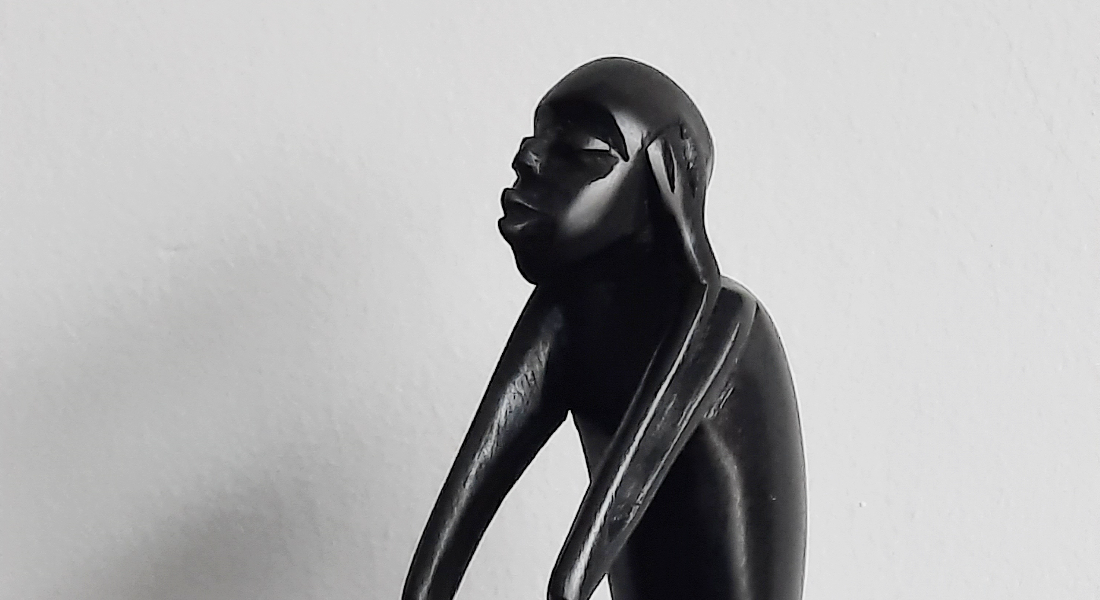 Whenever reference is made to a work of art named “The Thinker” in Angola, most people will think of the statuette “The Chokwe Thinker” (“O Pensador”).

The history of “O Pensador”, also known as “Samanhonga” or “Kuku”, goes back to 1932, when the Swiss painter and ethnologist Théodore Delachaux found the statuette in a “divination basket” (a basket containing many small objects used for the diviner to made prophecies at request of his clients) during an expedition to Angola. It is a wooden figurine, representing an elder, woman or man, in a position of deep meditation.

The gracious and inspiring position of the elder encouraged Delachaux, influenced by August Rodin’s sculpture “Le Penseur”, to name it “The Thinker”.

“O Pensador” is a work of art made by the Chokwe, a Bantu-speaking people living in northeastern Angola, as well as in southwestern parts of the Democratic Republic of the Congo and in the northwest of Zambia. Famous in Africa for their flourishing cultural traditions, the Chokwe’s semantically complex art forms include sculpted figures, masks, thrones, divination implements, basketry, and ceramics, many of which express historical, moral, religious and political conceptions.

Praised for its symbology and finesse, “O Pensador” has been exhibited in museums since 1936, and it was granted the status of a national symbol of the Angolan culture in 1984. Currently it can be admired at the Art Gallery of the African Union in Addis-Ababa, Ethiopia, and it is expected to be present at the Expo 2020 Dubai (postponed to 2021 and 2022) in the Angolan Pavilion.

Since 1984, “O Pensador” has gained greater visibility and relevance in Angola, in political, sociological and economic terms. For instance, besides being reproduced by sculptors and acquired in galleries, shops and craft fairs, it has influenced many economic sectors of Angola, which has resulted in a variety of trademarks applications in the country.

At present, there are 16 trademarks in Angola, in the names of five different applicants, consisting in the reproduction of the statuette, one of which is registered in class 30 for Coffee, tea, cocoa, sugar and coffee substitutes; rice, tapioca and sagú; flour and preparations made from cereals; bread, pastry and confectionery; sugar, honey and molasses syrup.

Bearing in mind the fact that the most relevant IP protection of an artwork is copyright, four questions arise:

(i) Is “O Pensador” a work of art protected by copyright, which could prevent the registration of a trademark?

(ii) Has a reproduction of “O Pensador” the needed distinctive character to be protected as a trademark?

(iii) What would be the consequences for a figurine originated by an indigenous people if it were registered as a trademark?

(iv) Can a reproduction of a work of art, which enjoys the status of national symbol of a state, be registered as a trademark?

In Angola, subparagraph h) of article 4 of the Angolan Law No. 15/14 of July 31, 2014, on Copyright and Related Rights, states that copyright protection shall cover works of sculpture. It is thus appropriate to determine in the present case that “O Pensador” is a copyrighted work.

However, as we work to answer that question, we are immediately struck by the difficulty of identifying the creator of the statuette. If, officially, this figurine is of Chokwe origin, its creator is, in fact, not known.

We find ourselves obliged to consider that “O Pensador” is an orphan work of Chokwe origin. In this sense, article 73 of the referred law provides that the term of the economic rights of the copyright owner for orphan works expires 70 years after the work has been lawfully made available to the public.

We know that the statuette was made available in 1936, almost 90 years ago, so we can safely consider that “O Pensador” is an artwork in the public domain and, as a matter of fact, freely available for reproduction. As a result, the copyright law shall not be a legitimate ground for opposing a trademark application.

With regard to trademark protection, article 31 of Angolan Law No. 3/92 of February 28, 1992, on Industrial Property, provides that trademarks are “any material signs that are used to distinguish the products or services of any enterprise”.

“We can safely consider that ‘O Pensador’ is an artwork in the public domain and, as a matter of fact, freely available for reproduction.”

In other words, to be protected, a trademark must be able to distinguish the products or services of one company from the others. Does a reproduction of a well-known work of art comply with the distinctive function exigence stated in article 31?

The Angolan Institute of Industrial Property (IAPI) was of the opinion that it does when it granted one trademark on May 31, 2018, reproducing “The Chokwe Thinker”. This position is in accordance with the European Union Intellectual Property Office which, for instance, has granted trademarks that reproduce the painting “Love and Pain” by Edvard Munch and the painting “The Night Watch” by Rembrandt.

Even if the argument about the effective distinctive function remains, the reproduction of “O Pensador”, in its artistic dimension only, can be registered as a trademark.

Can this specific piece of art be considered for any other type of IP?

First, “O Pensador” has the particularity of being of indigenous origin. It is true that Angola has no specific legislation regarding the IP protection of indigenous artworks, but it is also true that the safeguarding of traditional cultures including traditional works of art is the subject of increased concern and protection.

As happens in New Zealand when trademarks comprising Maori images are at stake, is it inconceivable that the IAPI would refuse a trademark if its use or registration may offend the Chokwe people?

Such position would be legally possible pursuant to subparagraph f) of article 35 of the Law No. 3/92 of February 28, 1992. In accordance with this subparagraph, the IAPI is entitled to refuse a trademark if it is in conflict with public order or morality—thus, is it in conflict with the morality of the Chokwe?

Second, we must consider the fact that the statuette was officially declared a national symbol of the Angolan culture by the government, when the first cultural symposium took place in 1984. Hence, the figurine is part of the nation’s cultural heritage and is a symbol of sovereignty. For instance, it is reproduced on the national banknotes and it is a traditional gift from Angolan representatives on the occasion of official visits. It also represents the country in international museums and exhibitions.

Accordingly, should not any trademark that reproduces “The Chokwe Thinker” be refused in accordance with subparagraph c) of article 35 of the Law No. 3/92 of February 28, 1992, which precludes protection to any trademarks that reproduce symbols adopted by the state?

In conclusion, the reproduction of a work of art can, in essence, be protected as a trademark registration in Angola. Nonetheless, this principle should contain exceptions that must take into consideration the origin and any official status of the piece of art.