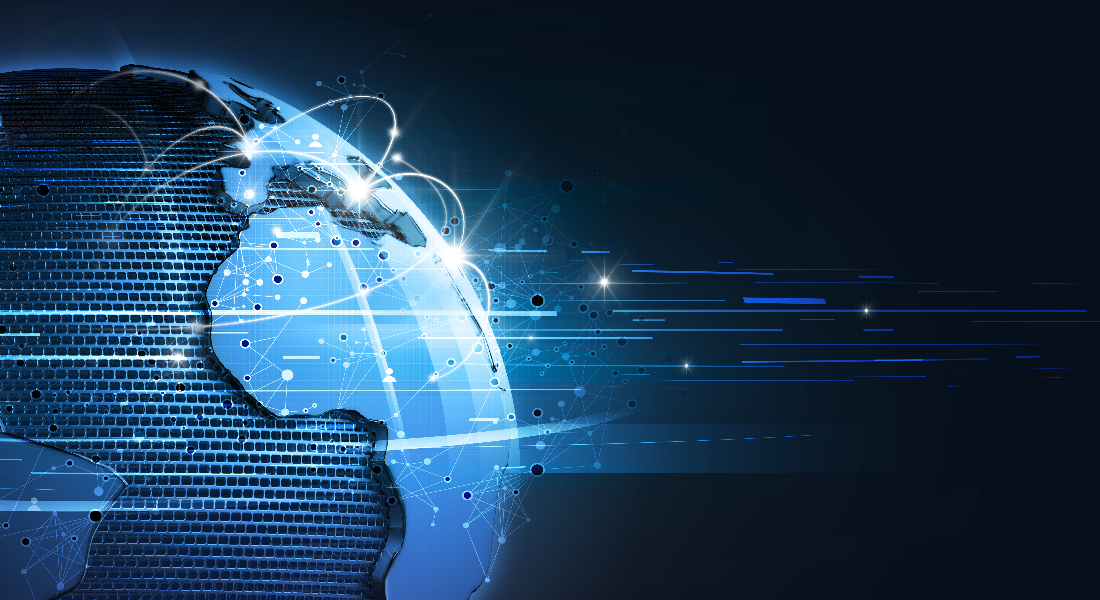 Vítor Sérgio Moreira of Inventa International examines the growing trend in EU priority claims in ARIPO patent applications and looks at which sectors those applications are most likely to originate from.

In this article, we aim to identify the profile of patent applications filed before the African Regional Intellectual Property Organization (ARIPO) in which priority is claimed via a document originating from a European Patent Office Member State (EU priority). In doing so, we intend to acquire more information about the main technological fields and applicants from Europe that seek patent protection with the member states of ARIPO. ARIPO was created by the Lusaka Agreement (1976). It is an intergovernmental organization for cooperation in matters related to patents, trademarks, and other IP rights.

In respect to patents, ARIPO is empowered to grant patents and administer such rights on behalf of Contracting States of the Harare Protocol (1984). ARIPO applications require the applicant to designate those member states where protection is sought. The ARIPO system does not replace national systems. The results of our research indicate a growing trend in the number of patent applications filed before ARIPO (AP patents) claiming an EU priority. The main technological fields observed are related to the pharmaceutical industry and the agrochemical industry. The applicants are major European corporations with a global presence in their respective industrial sectors.

The top 20 European origins of the EU priorities in AP patents were identified using the Espacenet database and are presented in Table 1. The search statement has comprised AP patent publications having priority from a European Patent Organization (EPO) Member State and published from 2009 to 2019, which resulted in 888 documents. 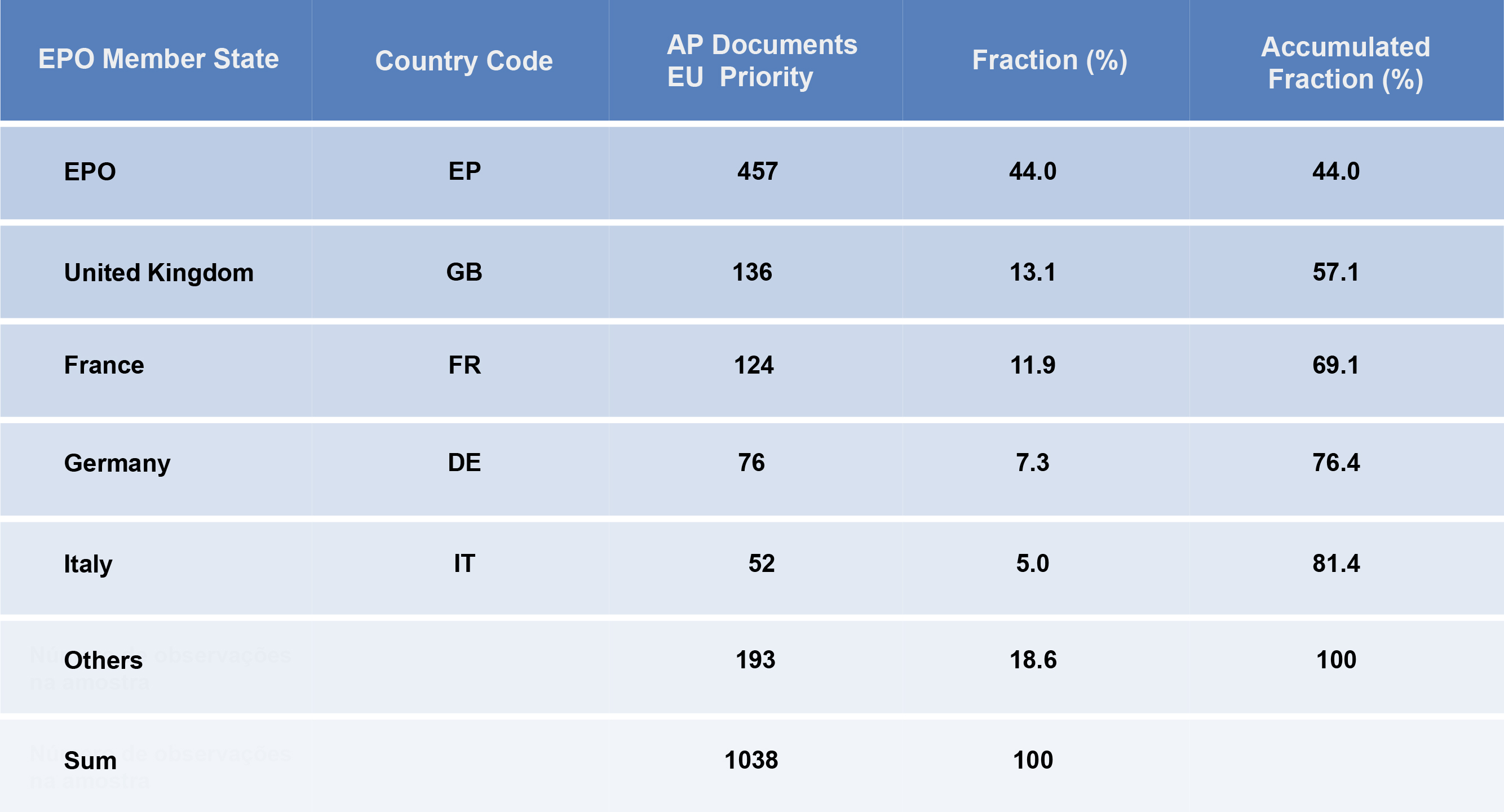 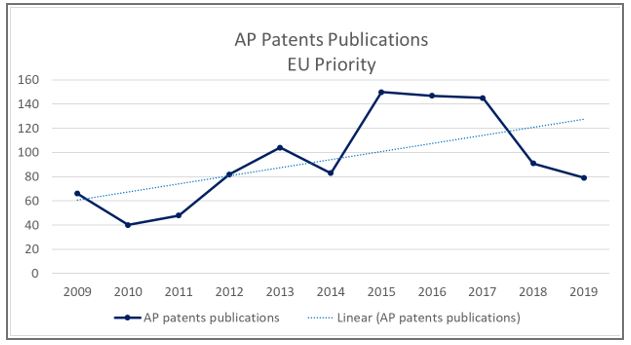 The trend of AP patents claiming EU priorities in the last ten years has been identified in the ARIPO patents database and is presented in Figure 1 (image on the right). These results were obtained after searching the ARIPO database for patents claiming priorities originated from the jurisdictions listed in Table 1 and published from 2009 to 2019. During this time period, the total number of AP patents is 1035. In order to identify the main technologies and applicants referred to by AP patents claiming an EU priority, the set of 888 AP patents published from 2009 to 2019 and obtained by means of the Espacenet database was inputted into the patent analysis free tool PatentInspiration. The most frequent IPC (International Patent Classification) Main Classes are presented in Table 2. The data indicates that a significant number of patent documents referred to pharmaceutical and agrochemical industries. The IPC main classes C07D and C07K referred to are chemical compounds that may have uses, for example, as active ingredients in pharmaceutical or agrochemical compositions. 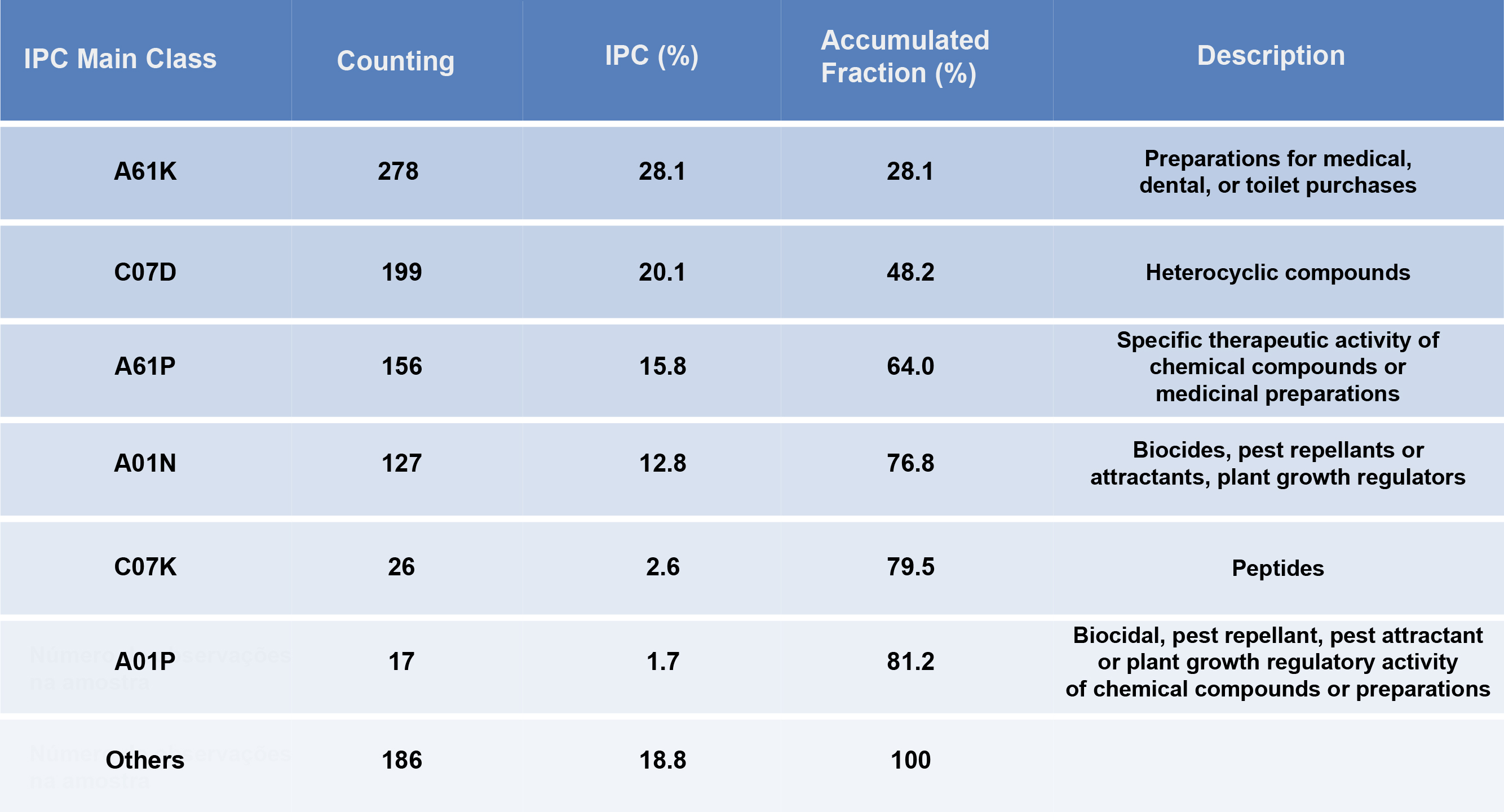 The United States results come about from ARIPO patent applications, wherein the applicants come from this country and a priority document was filed in the European Patent Office or a National Patent Office from a country mentioned in Table 1.

In addition, we have used the ARIPO database to identify, for the set of 1035 AP patents referred in Figure 1, the profile of the designation of member states, presented in Table 5, in order to contribute to the identification of the main jurisdictions of interest to the European applicants of the AP patents. 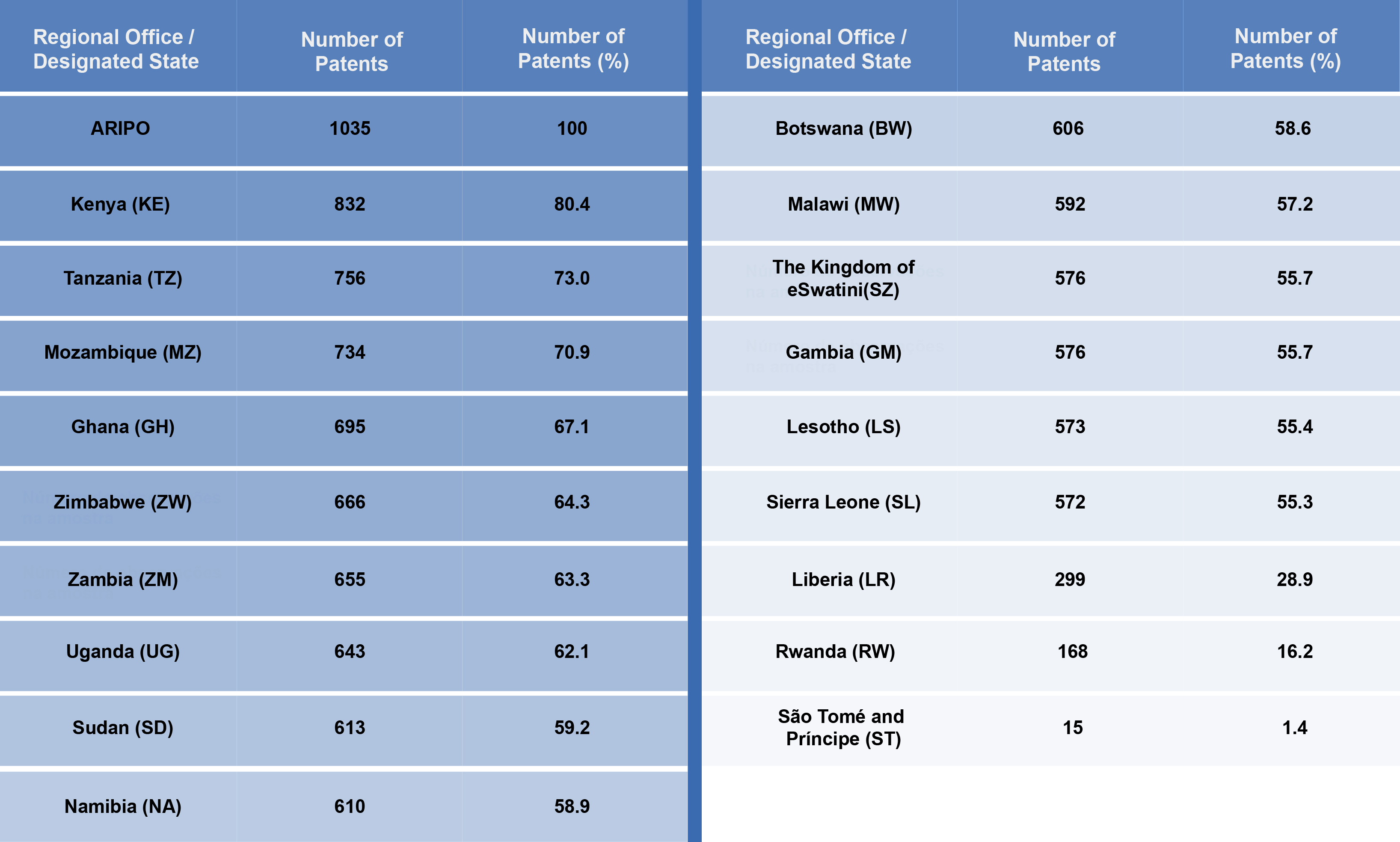 Concerning the Designation of Member States process, it shall be done by the applicant when the patent application is filed. If ARIPO decides to grant a patent, it shall inform each designated state of the fact that a patent application is about to be granted, wherein a state may make a written communication to ARIPO, reporting that if a patent is granted by ARIPO, the patent shall have no effect in said state. The written communication from a state to ARIPO must be submitted before the expiration of 6 months from the date of the notification by ARIPO and must be based on grounds that the invention is not patentable in accordance with the provisions of the Harare Protocol, or because of the nature of the invention, or because a patent cannot be registered or granted, or has no effect under the national law of that state. After the expiration of the said 6 months, ARIPO shall grant the patent, which shall have effect in those states which have not made any contrary written communication.

Moreover, in order to identify some variables that influence the decision of selecting Designated States by an applicant, we have calculated Pearson correlation coefficients and Spearman Rank correlation coefficients by referring to the number of patents for each Designated State, according to Table 5, and the following variables related to each one of the ARIPO’s signatories countries: Gross domestic product (GDP); Population; GDP per capita (Purchasing power parity; international dollars); and Global Innovation Index (GII).

The number of AP patents claiming an EU priority has grown in the last 10 years, from about 50 patent publications in 2008 to over 140 in 2017. These results show a prevalence of applicants and patent documents related to the pharmaceutical (IPC classes A61K and A61P), agrochemical (IPC class A01N), and oil and gas industries. Amongst the Designated States in ARIPO, Kenya, Tanzania and Mozambique appear in the top 3 of the most wanted countries for seeking patent protection by European Applicants. Population and GDP are the variables associated with the process of deciding upon a Designated State by an applicant.

This article was originally published in The Patent Lawyer magazine (March/April 2020).